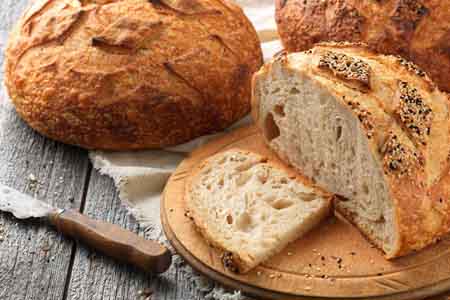 Sourdough is the oldest form of leavened (or ‘risen’) bread. Baking presumably existed for a long time before that, mixing a paste of dried ground grains with water, and then baking it. However at some point someone must have discovered that if the paste or dough was left overnight, or for a couple of days, it started to change in appearance and odour, and that the bread when baked was lighter in texture, easier to digest, and stronger in flavour. The oldest form of leavening was almost certainly due to this sort of accidental development of a starter, with small amounts of dough/paste being kept aside from one batch to leaven the next. At some point residues from fermented grapes or hops were used to provide an alternative source of yeast. Of course nowadays most baking is done with commercially isolated yeast.

Established starters contain a mixture of yeast and bacteria (Lacto Bacillus). Don’t worry, these bacteria are quite friendly (they are the same ones that are present in yoghurt, or that people consume deliberately in preparations like ‘Yakult’). The yeast and bacteria live together in a special sort of cooperative existence, with the yeast eating and breaking down sugars from the flour, and the bacteria feeding off some of the breakdown products from the yeast. The yeast provides the leavening action for the bread, but the bacteria are responsible for much of the flavour.

With the Artisan Sourdough Bread, bakers consider it as a form of Art in the making rather than baking bread. There are Standards and Codes must be followed, most of which are quite stringent yet delicate and patience are keys to be an Artist in Artisan Sourdough Baker. An example of Crumbs Artisan Sourdough Bread which follows the Standards  & Codes are Unbleached flour, sea salt, no additives, no added commercial yeast, no fats in any form and only sourdough starter is use for leavening of the bread.


Once you are ready, all you need now it lots of love, lots of time, and lots of patient. You will be able create an edible Art, Artisan Sourdough bread. As a result, our Artisan Sourdough range has a very distinctive tangy taste, thick crust and dense on the inside. Bread lovers & Gourmets are alike will much enjoy.

© Copyright by Crumbs | Power by Sapo

✔ Has been added to cart.